Khalid, Fatimah, and their three children 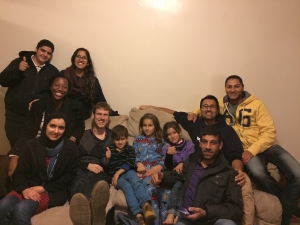 Khalid, Fatimah, and their three children were the second family we met in the program. They hail from Homs, where Khalid was a successful cook at his own restaurant. When the fighting initially broke out, they fled to Damascus for safety. After a brief return home and a second flight from the war, they made the difficult decision to leave the country. Traveling by foot with Khalid’s mother, they made it to the Misha Mishi camp in Jordan. Conditions were terrible in the camp, with long lines to secure insufficient amounts of food, water, gas (for cooking), and other vital necessities. Before long they left the camp and stayed with some of Khalid’s distant relatives elsewhere in Jordan, where his kids attended public school and the family scraped by. However, in Jordan, refugees were not treated equally and had no standing under the law; they existed primarily on the margins as an invisible population. On this account, after four years, the family made the decision to apply to resettle to the United States. They were initially placed in Pittsburgh, however their neighborhood was incredibly unsafe, enough so that the family rarely ever slept during the night. For this reason, they asked to be moved elsewhere in the U.S., although that meant forfeiting all the assistance and help they were receiving from the government or assorted NGOs. Khalid, who has back problems which have gone untreated here, also has yet to find a job, and the family’s future remains uncertain.